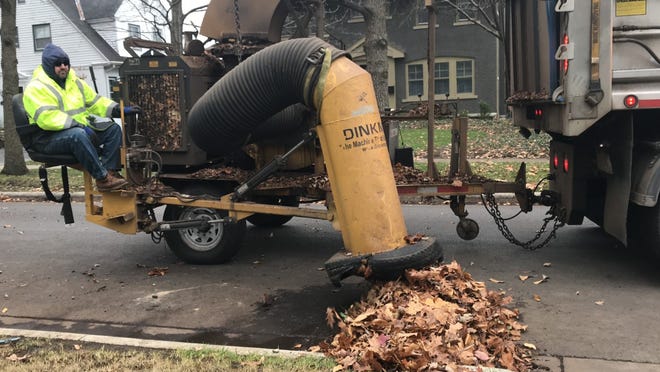 Upper Arlington crews responsible for removing fallen leaves each autumn are benefiting from the city’s efforts to upgrade equipment.

By next fall, all six frontline leaf-collection machines used by the Upper Arlington Public Service Department will feature hydraulic arms controlled by a crew member operating a joystick.

The city has five Dinkmar Leaf Masters. Adding the fifth one this year means the department has to use only one of the old leaf-collection machines that have to be operated manually.

Next year, two of the manual machines will be kept as backup options, but department workers largely won’t have to wrestle with the bulky equipment that employees said takes its toll on backs and shoulders when they’re used to pick up 1,400 to 1,500 loads of leaves each autumn.

“Just from a physically demanding standpoint, you’re riding on a seat and you’re controlling it with a joystick,” said Jeff Erdy, an Upper Arlington Public Service worker.

“The other machines, you’re walking alongside the machine,” he said. “(The newer equipment) will raise and lower hydraulically and will swing left and right. The old machine has a handle on it and you’re pushing a button and physically moving it up and down, back and forth.”

The machines cost approximately $59,000 each and are expected to last about 10 years, according to Tom Nutini, public service manager. They’re used six days a week, 10 hours per day, for about eight weeks a year.